Today, students, teachers and administrators across the province joined together at approximately 11:55am in a grand statement of: ARE YOU KIDDING ME, when EQAO abruptly decided to pull the plug on the maiden voyage of the online OSSLT, three-quarters of the way through the administration.

After pressuring school boards to gather technology, train students and hold very early practice tests to prepare them for the test, this was the last thing anyone expected. Although, I am very proud to say that our 88 writers squeezed under the wire and all completed both booklets.

As a literacy leader who was a central player in this titanic disaster, I was lucky enough to have a bird’s eye view of the scrambling preparation, rocky trial and official pilot crash and burn of the online OSSLT. This perspective has given me the credibility to make some suggestions to EQAO for the next round of play in the OSSLT online game.

Here’s my list of things EQAO should learn from this online trial:

2. School boards all have different IT infrastructure and numbers of IT employees with diverse backgrounds and preferences regarding sharing information with staff and preparing schools for major tech events. There needs to be some consistency here in terms of their training and communication to staff. Our IT staff was FANTASTIC and told us that we should have no more than 14-15 students in each room, that staggering starting rooms by a couple minutes was a good idea and not to panic if computers froze, to simply pause students and reboot the Chromebooks. As a result, at my school there were tech issues, but none that were completely devastating to writers and all our students successfully completed the test! Clearly, this was not the case in other school boards, resulting in major inconsistencies with technology throughout the province.

3. Listen to feedback. Many schools ran full online practice tests and provided EQAO with feedback on various tech issues. All of the tech issues that occurred today also took place on our practice test day, only on a larger scale. Did they not listen to any feedback from individual schools? One would assume that this would have been their greatest resource.

4.  Don’t sink your boat on once you’ve almost made it to shore. Seriously – when they decided to pull the plug on the test, most students at schools that were having successful adminstrations were almost done. Why, for the love of God would you do this to a kid who has sat there for three hours, through tech issues and persevered. THANK GOD this did not happen at our school, but I know for a fact it did at many others. My understanding was that if there was tech issues at some schools or with some students to let the others finish and those that didn’t would have a chance in March. Clearly, EQAO randomly decided to trash this idea in the midst of the test. Brutal.

5.  If you do not mark these tests, you will have lost all credibility in the eyes of students, teachers, board administrators and parents. Yes, there are strong rumours that  this is the case. Even though there are many schools that had successful adminstrations, there are many that did not. Apparently, this is EQAO’s argument for calling it a wash and  not acknowledging completion of any of the tests.

Thankfully the Teacher’s Pension Plan has recently purchased Wine Rack stores. They will be flourishing with customers come 3:30pm. This hasn’t been a great day for literacy……or tech……or really anyone at a public high school.

Congratulations to anyone who successfully completed this day without a monumental meltdown – you are a Jedi!

Hopefully, EQAO can try to save face by at least marking the online tests that were successfully completed today. If they don’t, please join me in calling and harassing them with a long list of complaints regarding this very poor decision (EQAO contact information below). 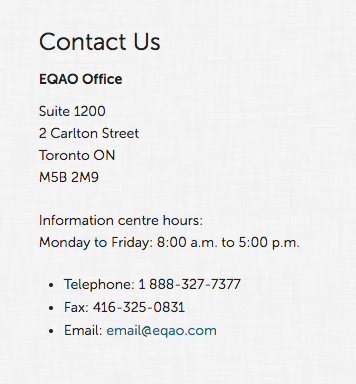 Finally, if YOU have any tips for EQAO’s next online OSSLT administration, please leave them below – and don’t censor your comments – let’s face it we all need a good laugh to end our day on a positive note!